We got up early today, fed Reese some breakfast, and then went over to the UIS campus for the On-Line Graduates brunch. It was great meeting some of the faculty and students that I’ve had classes with. Counting me, three of the four members of my capstone project team were there, which was nice.

After brunch and some picture taking we went over to the Prairie Capital Convention Center for the commencement ceremony. It was a little long, but good. I’m glad I didn’t miss it. The commencement speaker was Wenguang Huang, a UIS graduate, who spoke about some of his experiences growing up in China. After the speeches it was our turn to walk across the stage and receive our diploma holders. That was definitely the high point of the day. I know the grades aren’t in yet, but it does bring a little closure to the process. Once we were all done, we were dismissed and got to pick up a free copy of Huang’s book. I was lucky and got one of the signed copies.

From there we went back to campus to take some pictures in my regalia and then back out to grab a little dinner before turning in for the night. Reese and I downloaded pictures from the cameras and his DSi once we were back at the hotel. The little guy’s got a good eye, and I’m thinking of how to encourage it. 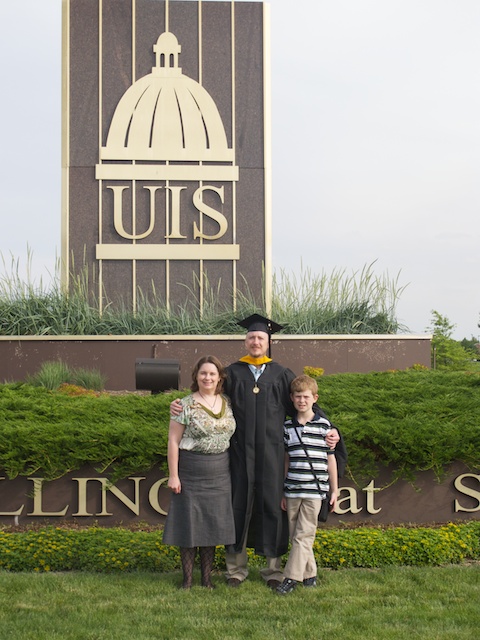 Me in graduate regalia, with Reese and Heather