We got up early this morning and headed up to the buffet for breakfast. We got to watch the ship back in to its mooring while we ate, which was really cool. It’s pretty impressive to see how fine a degree of control the captain has over such a large ship. Once we finished eating, we went down to deck 4 and lined up to get off the ship. Disembarking was interesting. They scanned our cruise cards, in effect checking us out, so that they could keep track of who’s on and off the ship. From there we walked up to the Mahogany Bay cruise terminal/shopping center to find our tour guide. We were early, so we wandered around, snickering at the overpriced jewelry and picking up souvenirs.

We returned to our queueing area and met up with our guide, who took us to the mini bus that would be our transportation around the island. Our first stop was the Carambola Botanical Gardens, where we were guided through some rain forest, learning about many of the plants we’ve used, such as allspice, coffee, and cacao. At the end of the tour, we had a light snack of some fresh local fruit. Once back on the bus we went on to Roatan Butterfly Garden. Even though the weather was not cooperating, with some light showers, we weren’t disappointed because they had a number of parrots and other birds there. We actually got to handle a few of them, or more accurately, we got to be perches for a few of them. There weren’t many butterflies to be seen due to the weather though. But it was still really cool. Next up was a stop at the West End village to see a cultural show, put on by some members of one of the local tribes, and some shopping. I picked up a post card for Reese and some cashew wine vinegar. Heather found a nice wooden bowl at one of the stores. We then got back on the bus and headed to our last stop, a cameo factory where we got to watch cameos being made. It was very interesting, and they’re definitely works of art. We then boarded the bus to head back to the port.

My head had been a little wonky yesterday, and was in full on sinus infection meltdown today, so I was really thankful to have a pharmacy and over the counter antibiotics available. Hopefully a course of azithromycin will knock it down. If not, I’ll be seeing the inside of the ship’s medical center soon. Since we had some free time before the ship sailed, we went back on board to drop off our loot, get some lunch, and pick up our passports to get them stamped. When we got back on the ship, they again scanned our cruise cards and then compared our faces to the pictures they took when we boarded. It was nice to see the security in operation. So, with free hands, we went back to the stores, did a little more shopping, got our passports stamped, and then mailed Reese first post card off. On the way back to the ship for the final time, I picked up a liter of The Macallan scotch in the duty free.

We hung out on the promenade and watched the sailaway, then went forward and got some great pictures of the sunset as we were heading out towards Belize. Tonight is going to be another early night because we’ve got to be up before 6:00 AM to get dressed, eat, and meet up in the theater for our excursion by 6:45 AM. 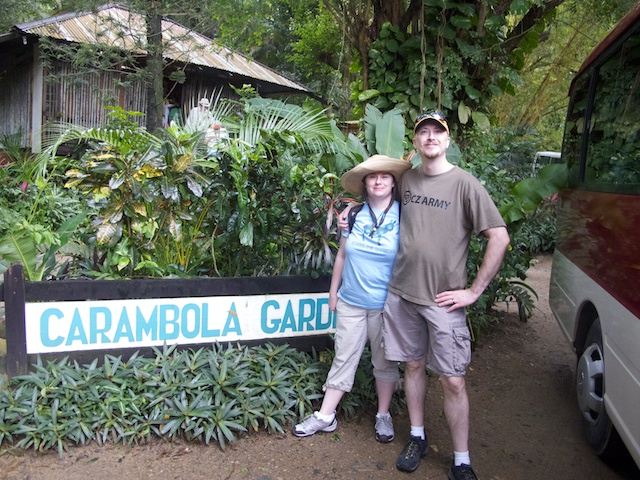 Heather and I at the Carambola Botanical Garden 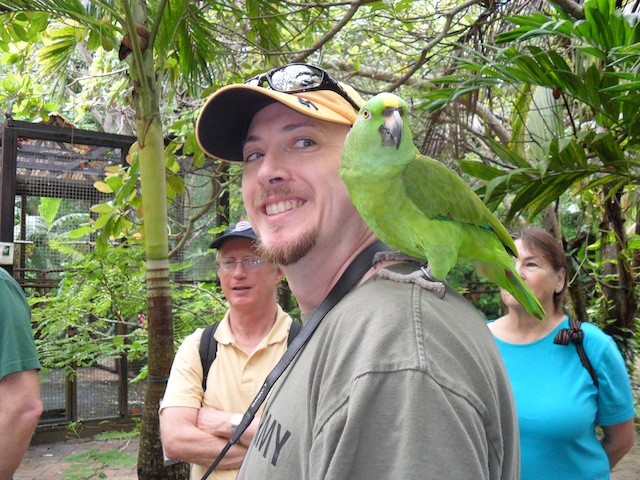 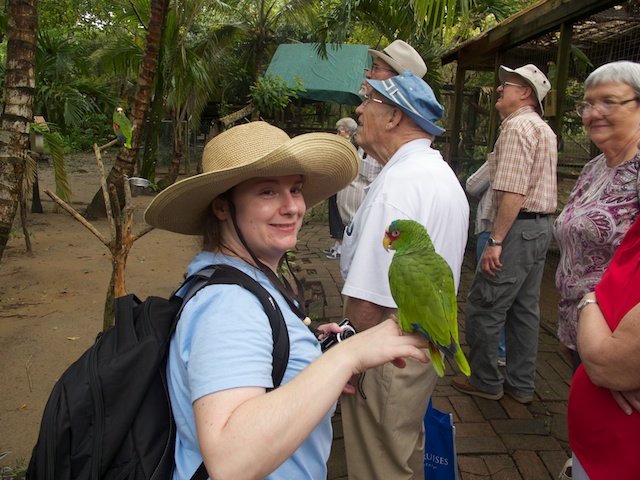 Hitching a ride on Heather.