We got up at an ungodly hour so that we could get our stuff together and get some food before heading over to the Princess Theater for our tour rendezvous. We were early, but that’s fine by us. Since Belize City does not have a deep water port, the cruise ships have to anchor a few miles off shore, which means you have to take a tender in to the port. Since we had tours booked through Princess, we got priority for the first tenders. At the theater, they had each tour seated in a different section in order to keep everything organized. There were more people in our tour than I’d expected, which was nice, since it was definitely one of the off the beaten path ones. Once the tender arrived, we were escorted out to deck 4 and had to hop over to it, which was interesting considering the weather and the rough seas. The ride in was a little bumpy, but it was quick. The weather was definitely a problem, with overcast skies, wind, and rain. Things were not looking good for our tour. I brought my SPOT personal locator beacon, and turned it on as soon as we were off the ship. Hopefully we’ll get some good position reports on the website for later.

When we arrived at the port, we hopped off and queued up to get on the bus for the first leg out to the Lamanai Mayan ruins. We met our guide, Bul, on the bus, and got a good lecture that covered some of Belize’s history as well as the history of the Maya and the Lamanai site. We got to see a good chunk of Belize City on the way out, then we cruised down the highway for about an hour, heading to the river site where we were to start the next leg, via speed boat. Part way down the highway, it started raining, and didn’t stop. When we got to the boat dock, it was raining pretty steadily, and some of our fellow travelers were regretting not having packed ponchos or other rain gear. They especially regretted it because they were for sale at the dock, just off the tender, for $1. By the time we were at the speedboat dock, the price had gone up to $5. We had picked some up before we left for Houston, and now seemed like the best time to put them on. We got on the speedboat for our hour long trip down the New River to Lamanai. The rain let up a little, but it was still coming down, and we definitely got wet, even with the ponchos. The river ride was a lot of fun, though it would have been much more enjoyable had it been sunny out. We saw some wildlife, mostly birds, on the way down, though we didn’t see any alligators. We had one bit of excitement, when we took on some passengers due to one of the other boats having lost one of their props. Other than that it was an uneventful cruise down river. After a damp hour, we arrived at Lamanai.

When we got to Lamanai, we got off the boat and headed for one of the pavilions to get some lunch. The food was traditional Belizean dishes, including a delicious coconut rice and beans dish that we got the recipe for. After filling our bellies, we headed over to the small museum on site to look over some of the artifacts and read up on more of the history of the site. Finally, it was our turn to head out on the tour. Bul was a great guide, leading us through the jungle paths, telling us about the different plants we were seeing, as well as some more of the history of the site. Our first stop was at the Mask Temple, which was pretty cool. This was the first Mayan structure either of us have been up close and personal with, and it was really cool! We were asked not to climb due to how slick the limestone was thanks to the rain, but I snuck around the back of the temple and took that staircase up to the top for a brief peek. It turns out that the pyramids are just a base for the temple, which is the structure at the top. After that we came back down and took some pictures in front of the masks.

From there we moved on to one of the ball courts, where they played pok ta pok, and then on to the Jaguar Temple where we finished off the tour. Due to the distance from Belize City and the ship, we didn’t have as much time as we would have liked, but we did get to see some really interesting structures while we were there. Before leaving, I hit one of the souvenir shops and picked up a few things for Reese. As the weather had been steadily worsening, we weren’t looking forward to the ride back up river, but what can you do when you’re a couple hours away from the ship, with no other means of getting back but suck it up and get going. So we enjoyed a cold and wet ride back, getting poured on and pelted with pieces of the cheaper ponchos other passengers had been wearing. By the end of the boat ride back, we were soaked and cold, and ready to get on the bus for the ride back to Belize City. The ride back was warmer, and I had time to fill out the post card before we got back. Bul graciously offered to mail it for me, so we’ll see if it gets up to Reese. We were pretty late in getting back, but still had a few minutes to do some shopping before catching the last tender back to the ship. I found the hot sauce I’d been looking for, one that Aunt Patti had recommended, called Marie Sharp’s. I picked up a few different flavors and heat levels, then we hustled over to the tender to head back to the ship.

Once back on the ship, we dropped our packages, changed out of our wet clothes, showered, and headed to dinner. Afterwards, I had to run my shoes through the dryer in the self-serve laundromat due to how wet they were. There was no chance of them being dry by tomorrow morning, and we have another set of Mayan ruins to tour then. 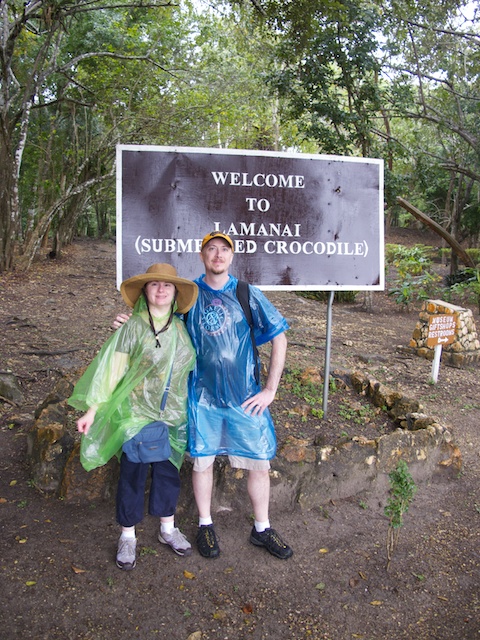 Us at the entrance to the site. 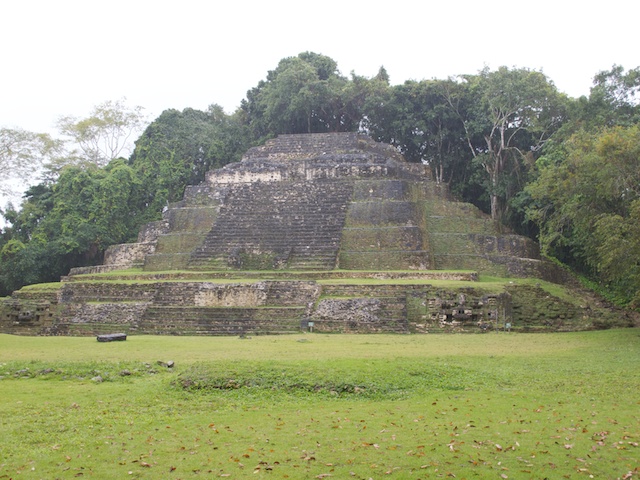 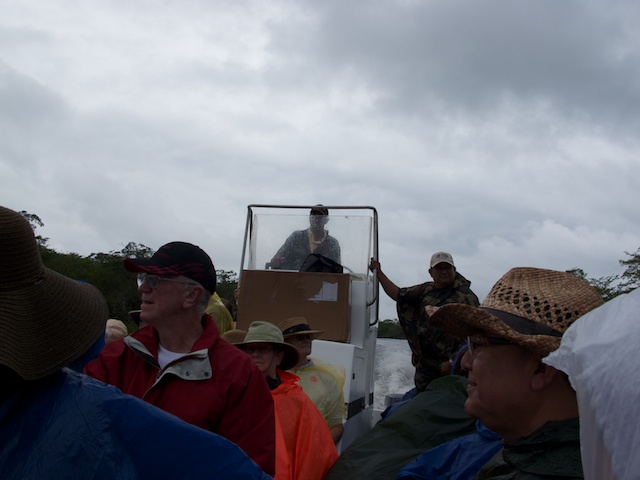 Our boat captain (left) and guide (right) on the ride back. 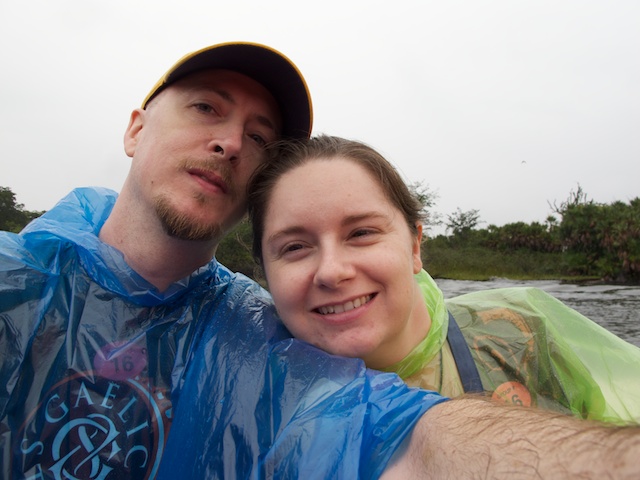 The wet boat ride back. 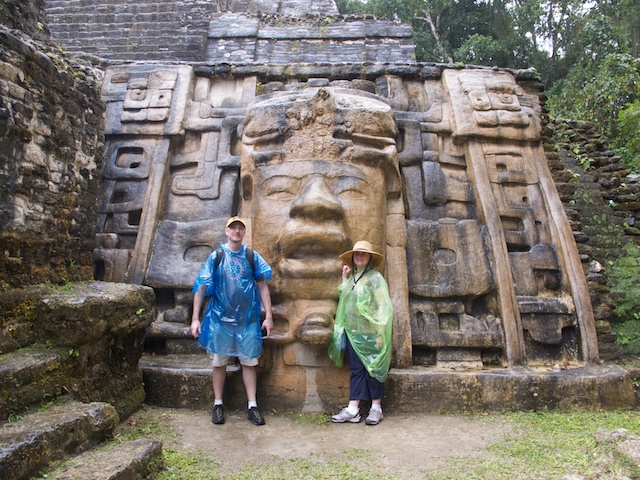 Us at the Mask Temple 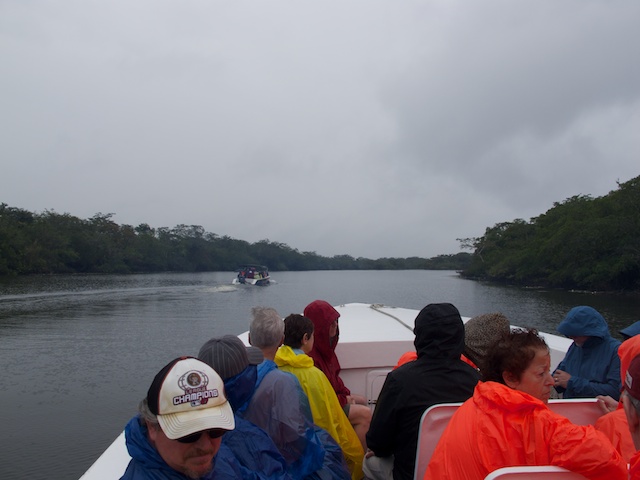 On the ride out to Lamanai.