I’ve been thinking about picking up a new bike for a while now. I really enjoy riding the RT, but the maintenance costs, both in terms of time and money, have soured the relationship. I had been looking at the Dyna Switchbacks, because they’ve got bags but still have some performance. So I went up to American Eagle Harley Davidson to talk to the sales people and throw my leg over a bike or two.

When I got there, James and I started talking about bikes, and I tried the Dyna on for size. It just wasn’t my thing. I’ve gotten really spoiled with the RT’s fairing, a lot more than I thought I had. So we went over to the Road Glides. These are full sized FL touring bikes, which are a lot heavier than what I’ve been riding. But the fit and feel of them! I had to take this one out for a test ride. James got me set up, and I went over to the Rider’s Edge lot to do some figure eights to get comfortable with it before heading out on the road. Despite my misgivings, it handled well and didn’t feel nearly as heavy as it is.

Feeling a little more confident, I went and explored the neighborhood behind the dealership for a while, getting used to the handling, braking, and acceleration. It was comfortable and easy to ride around on surface streets, including taking some U-turns. Eventually, I got on to I-35E and headed south. This is not a good road right now, what with the ongoing construction, but the Road Glide’s suspension handled it well. Handling was good, throttle response was great. Any time I needed a little oomph to pass a truck, it was there. I actually messed up and missed my exit, which forced me to go a lot further south before I could get turned around to get back to the dealership. That gave me the space to test the cruise control, which sealed the deal for me.

I got back to the dealership, checked back in with James, and started talking numbers. We got to a figure that was good for both of us, including a very reasonable trade-in amount for the RT, without any real hassle. At that point I called Heather, talked it over with her, and headed home. Once she got home from work, we headed back up so that she could try it on for size. It got two thumbs up, so I’m heading back up tomorrow to sign the papers, hand over some cash, and bring a new bike home.

I was getting ready to ride in to an on-site meeting with the client this morning, warming up the bike and putting my cold weather gear on, when I noticed that it wasn’t rolling as well as it should have. So it went up on the center stand, transmission in neutral, and I started rolling the rear wheel around. Lo and behold, there’s a large staple shoved through the tread, with both points puncturing about 4mm apart. It’s really not safe to plug/patch that, so I’ll be replacing a tire with about 4,000 miles on it. I’ve been hunting around for new ones, and it looks like that’s going to end up being a $150 staple. 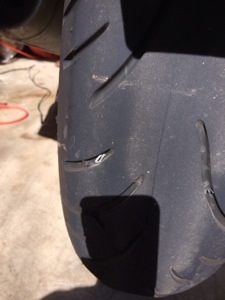 I finally got to go see this, after being in Kentucky for the first showing and being iced in for the second one. I almost didn’t make it to this one though. After a nice dinner with my sweetheart and a chat with Reese, I hopped on the bike, and headed out. Since I was part way there, thanks to a doctor visit, I decided to avoid the rush hour traffic by sticking to surface streets. Bad idea. Everything was a parking lot. I left at 6:15 and it took me an hour and fifteen minutes to ride about 20 miles. I got there just before the movie started, a little frazzed, but eager to see it.

It’s a great film about motorcycling, told from the riders’ perspectives. There’s some great shots of some of the really early stuff, like board track racing, as well as shots from Bonneville, Daytona, and more. It really did cover the spectrum of riding, from commuting to touring to the various kinds of racing and competition. There was a little more of a slant towards that aspect, but that didn’t detract from the picture at all. If you’re a motorcyclist, you really should go see it or even buy the DVD.

Hit the Why We Ride website for more information…

I’ve got a new Ham Radio project coming up. I just ordered a Yaesu FTM-10R, a waterproof 2m/70cm transceiver, and accessories, that I’m going to install on the BMW. I picked up the newer model of the Bluetooth board, and am hoping that I can get it to interface with the SRC in my helmet. It looks like I’m going to have to put together some sort of remote PTT switch, unless the helmet’s VOX is a little better than I think it is. But either way, once I get some time, and the weather cools off a little, I should be on the air while I’m riding!

The last day. I got the bike packed back up, and headed down the last few hundred miles of highway towards home. The heat was really building by the time I pulled in to the garage, but it was good to finally get back home. Back to back road trips really wear you down. I’ll save the unpacking for later, it’s time to cool down and rehydrate.

It’s never long enough, and it was time to head home. I got the bike packed up and pointed it towards Texas. I wasn’t planning on getting home today, just trying to get about half way there, taking my time and enjoying the ride. And true to form, from somewhere around Rolla, MO through to somewhere around Lebanon, MO, I got monsooned on. The streak is intact for another year. After getting back into the sun, I slowly dried out as the temperatures rose. I’d initially planned to stop in Joplin, MO, but I was making good enough time that I pushed on to Miami (pronounced my-am-uh), OK and grabbed a room at a hotel that was a few steps up from scuzz. After getting the bike unpacked, I popped over to Kick Off Bar and Grill, a local sports bar for some dinner and was pleasantly surprised to find that they had local beers on tap. The Atlas IPA by Marshall Brewing Company went really well with the patty melt. After that, back to the room and off to bed. Home tomorrow…

As has been my tradition, since I’m only a few hours away, I rode up to Peoria to see Reese. I’d texted with Joi and she knew I was coming, but we decided not to tell Reese so that it would be a surprise. Needless to say, he was definitely surprised. We spent a few hours together, hanging out, running errands, and grabbing some lunch before I had to head back to the farm. Reese has gotten taller than I thought he would. Soon enough he’s going to be looking down on me.

I got back to the farm just in time for dinner, and then settled in around the fire for an evening of more good booze and time with good friends. I think I finally turned in around 11:30 PM.

Today was a short day, which was exactly as I had planned, because I had a special stop intended for lunch. There’s a great barbecue restaurant in St. Louis called Pappy’s Smokehouse. I’ve wrote about it before, and it’s still as good as ever. The line to get in was also as long as ever, but trust me, the wait is worth it. It took me about 45 minutes to get up to the counter to put my order in, a pulled pork sandwich and sweet potato fries. It was delicious, and filled me up nicely for the last bit of the ride in to the party.

I crossed into Mordor On The Mississippi north of St. Louis and headed in to the farm where the super secret party is happening. There were lots of familiar faces, and a few I haven’t seen in years. I got my tent pitched and spent some time catching up with everyone before heading in to town for dinner. After that we spent the evening hanging out around the fire, drinking good booze and telling better stories.

Yeah, it’s on the blog, but it’s not the ride that’s the secret, it’s the party. Today was just me beating feet for Springfield, MO. I left around 9:00 this morning, heading up TX-121 to US-75, then up US-69 to I-44 and in to Springfield. I’m happy to announce that my 20 year long streak of getting rained on, serious rain, not little sprinkles, is intact. I rode in an out of showers between Sherman, TX and Durant, OK before emerging in to simply overcast skies for the rest of the ride. Tomorrow will be a short day, with a stop in St. Louis for some great BBQ…

Last day of the ride, and the longest. Not much to report, other than it being a long day. I left at around 8:30 in the morning, and rode all the way back to the house, a total of 683 miles, arriving at about 8:45 PM. The total distance ridden was around 2144 miles. I’m pretty beat, so I’m heading to bed. Photo downloads, Spot Adventures creation, and video editing will be done later.