After an extremely restful night’s sleep, we got up and got moving. First thing on the agenda was to head up to the buffet for breakfast. I’m a little worried about my waistline, because the food is good, and while portions are small, there is nothing stopping you from going back for more.

With full bellies, we decided to walk off some of that food and do some more exploring. From our cabin, out the exit at the end of the passageway, we came out on the upper promenade, almost completely forward, on deck 8. There were some great views dead ahead, with no obstructions, and since the weather was improving, we decided to stay out for a little while longer. We ended up making a complete circuit of the ship, stopping at the aft section for some wake pictures. There was a little rain ahead of us, but we didn’t see any actual drops while we were out and about. We’ll see what the weather has in store for us during the excursions. Hopefully things stay nice.

While we were walking around, we found out that the ship’s pub lunch was being held today in the Wheelhouse Bar. It’s usually done on one, or maybe two, sea days, and they serve traditional English food such as fish and chips and steak and kidney pie. It’s pretty popular, so we got there a little early just in case and got in on the first group. I had the fish and chips, which were really, really good. Some of the best I’ve had outside of England. Heather had the plowman’s lunch, which wasn’t as good. It’s not that the food was bad, it was great, but the dish included paté, which she found out that she doesn’t care for. I tried it and it was pretty good, so it’s not a case of bad paté, just personal preference. We went up to the buffet to get her a little more food later, and then back to the room to take a nap.

Tonight was the first of two formal nights, meaning we had a great excuse to get dressed up. The ship’s formal night dress code is a dark suit or black tie for men and evening wear for women. I packed one of my kilts, along with the prince charlie jacket, so I was good to go. Heather picked up some knock your socks off dresses before we left and packed the best looking of them. I think we did ok, though she did have to do a little guard duty because the kilt was a bit of an attention getter. I got lots of comments, and a few pictures taken with other passengers. Dinner was delicious, and the desserts were really tasty. After dinner, we went back to the room, changed up, and did a few laps around the ship to work off some of the extra calories. 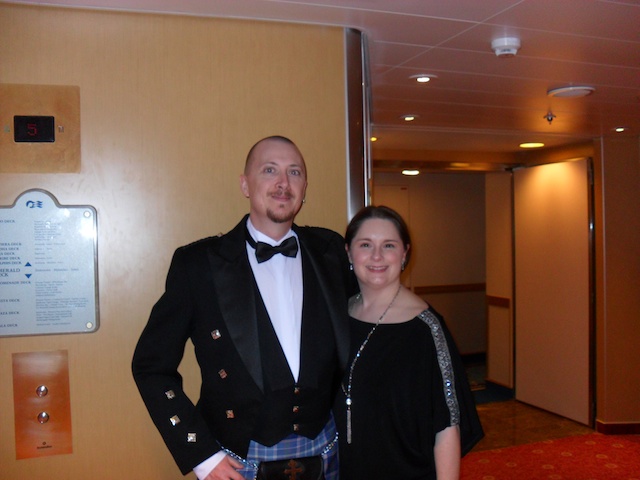 Us all dressed up for our first formal night. 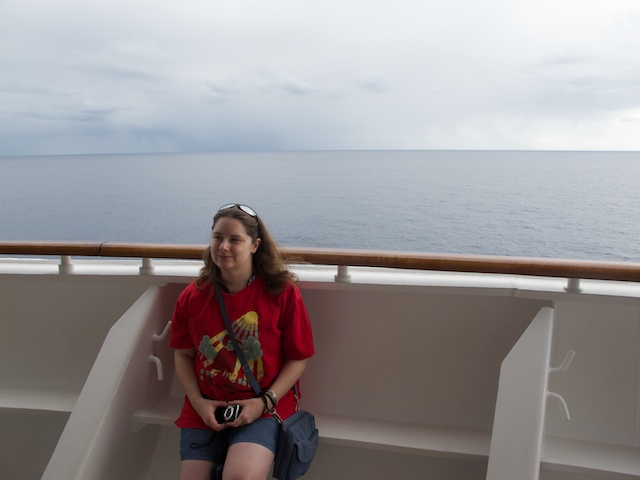 Heather up on the promenade, all the way forward on deck 8

Heather and I got dressed up and headed out to The Dram (warning, auto play music) for a Laphroaig tasting. Simon Brooking was there, of course, and we got to sample the 10 year, Triple Wood, 18 Year, and the 2012 Cairdeas. They were all really tasty, and I’m definitely going to enjoy the Cairdeas bottle I picked up yesterday.

The Dram was really nice, with a huge selection of Scotches available, and a nice, laid back decor. It’s definitely somewhere I’d take friends to hang out for an evening. While we were there, we got to talk to a few of the Beam Brands representatives about Laphroaig, some of the local stores, and the business in general. We also got to chat with Simon for a little while. It turns out that we were both wearing Clan Donnachaidh tartans, specifically variations on Roberts/Robertson. We also talked about the upcoming 200th anniversary celebrations and got some tips on getting over to Islay. It’s a couple years off, but we’re planning on being there.

Heather and I braved the rain and went out to the second Dallas Area Blogshoot today. The Jeep was packed full of firearms and ammo, as well as a couple prizes for Kilted To Kick Cancer fundraising. We had a great time shooting, talking, and teaching a few new shooters how to shoot safely. Thanks to The Redneck Engineer and Bob S. for putting it together, as well as to everyone who came out. You all are a great bunch of people and we’re honored to know you all.

And yes, I was kilted today, and did raise some more money thanks to some really generous people. If you haven’t donated, please head over here and throw some money in the pot. It’s a good cause and your help would be greatly appreciated! 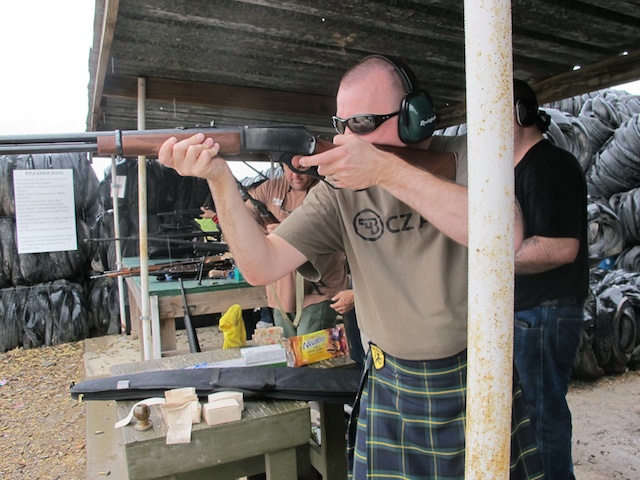 Plinking at the 100 yard range

Reese, Heather, Aunt Sandy, and I went up to St. Maximus for Liturgy in the morning, bringing the rings, crowns, and icons with us so that Father Justin could bless them. After that I took Reese back to the hotel and went home to start getting ready.

I got up to the church a little earlier than I’d expected, which turned out to be good because I forgot my cufflinks. Thankfully, Mike hadn’t left yet, so he grabbed them and brought them with him when he headed over. We got everything set up in the church, did some last minute prep work in the hall, including getting the beer kegs on ice and set up, and then waited for everyone to start arriving. The cakes arrived and got set up thanks to our minions, a couple teenagers from the church. They looked great and we couldn’t wait to cut in to them. As it got closer to the starting time, Mike and I got changed into our kilts, and took our places in the church. Due to a miscommunication between the bridal party and us, we were both waiting for the other group to let us know that we were ready. After getting that sorted out, the service started. Heather looked great, actually making me pause a little to regain my composure as I met her at the back of the church. We got through the service without anything major going wrong, and worked hard to keep our composure during the receiving line afterwards. It was great to see all of our family and friends there.

We then went back over to the hall and started the reception, with a great introduction thanks to Mike. The food was great, our minions helped keep everything flowing nicely, and the homebrew was a hit. We got to cut in to the cake and fed each other little pieces without turning it in to a food fight. Then Reese and I cut the groom’s cake and I fed a little to him. We continued to nibble on some food and circulate, talking with friends and family, for the next few hours. When it was time to close things down, our families and bunch of the people from church pitched in to get the hall cleaned up and everything packed up to head back home. We are truly blessed with some great people in our lives.

Then we headed home and crashed out as exhaustion finally won out over the excitement of the day. 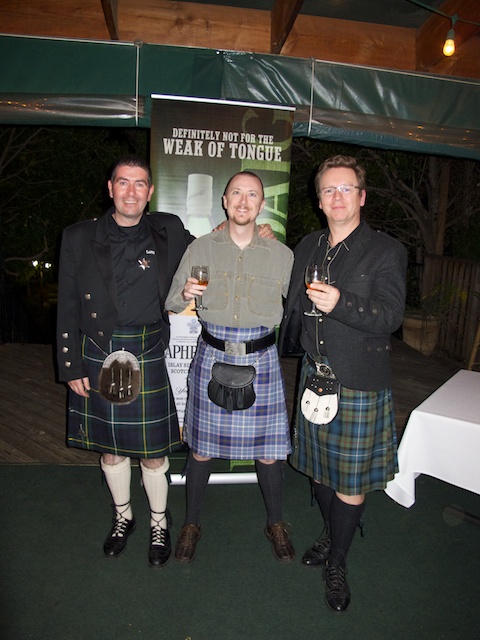 Reese, Heather, and I headed out to Frisco to meet up with some people who put together a tartan night at the Frisco Rough Riders opening night.  We snacked at The Irish Rover Pub and then did a kilted walk, with a piper, over to the park to watch the game.  The seats were great, Reese had a good time, and the Rough Riders won.  What more can you ask for?  Pics after the jump…

END_OF_DOCUMENT_TOKEN_TO_BE_REPLACED

Heather and I took DART down to Fair Park to spend the day at the North Texas Irish Festival.  It was a little chilly and very windy, but once we got indoors it was fine.  The turnout was a little better than it had been in years past, which was nice to see.

I picked up another print from Jabberwocky Graphix, got some cranberry orange scones, and a new kilt belt.  I also got to meet up with some of the local X Marks the Scot members and took some pictures there. 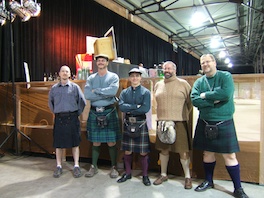 The five of us that made it to the meetup…

I placed the order for my second Kilt today.  I’ve settled on the 5 yard traditional in Texas Bluebonnet tartan from USA Kilts.  I’m not sure when it’s going to be in, but pictures will follow.  They’re estimating 6 to 10 weeks, but for a hand made, traditional kilt, I’m ok with waiting.  Maybe.  The jonesing has definitely started!