The rest of the parts came in from Crutchfield while I was at kendo practice last night, so after work I got busy with the install. It all went in easily, once I got the adapter to connect the radio to the factory wiring harness. The speakers just dropped in to the existing mounts, no steuggling at all. It sounds great, and having integrated Bluetooth, including hands free, is a significant improvement over the crappy stock radio. 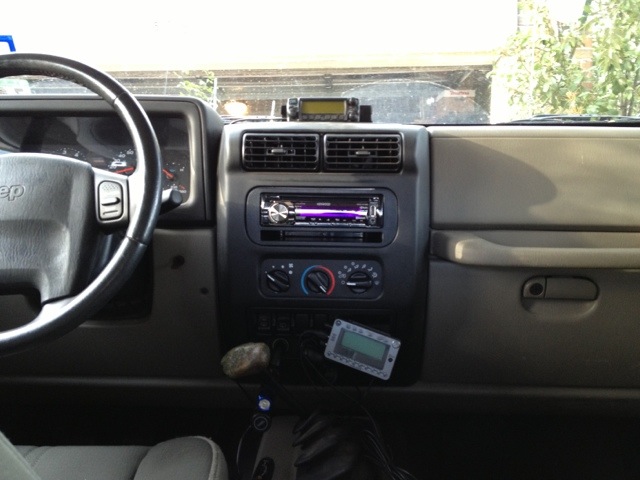 I started working on the Jeep this morning, first disassembling the dash to get the radio out. It wasn’t too hard, but involved removing the center console as well as the glove box in order to remove the anti-theft bolt holding the radio in. Once I got it out, I started pulling it apart in order to get the CD out. It was as bad as I feared it would be, because there were multiple deep gouges through the CD, so now I’ve got to buy another copy. I took a short break to head over to Crutchfield to order a new radio and speakers. I’ve got a pair of 4x6s and 5.25s coming to replace both the in-dash and sound bar speakers, as well as a new Sony head that has Bluetooth and HD radio functionality. It’s a heck of an upgrade from the 2003-era stock radio that the Jeep came with. Since the radio was toast, and I needed to remove the old speakers anyways, I did just that. They came out pretty easily, and now I’ve got lots of open compartments in the dash.

While I was at it, I pulled the cover below the steering wheel and started in on the repairs to the fog light switch. Due to including air lockers on the Rubicon model, Daimler-Chrysler moved the fog light switch from the center console to the end of the turn signal stalk. Unfortunately, it’s a weak point and mine stays on all the time, running the battery dry. I’d pulled the relay a while back to keep the battery intact, but I miss the extra forward lighting, so it was time to fix. I went a slightly different route than some of the other guides on the Internet, just because I felt like it. What I did was open up the wiring bundle on the right of the steering column, located the white wire with orange tracer, and cut it. From there, I spliced in a lit rocker switch so that the original fog light switch would still work, but until that rocker is switched on, they won’t come on. They work just fine, and the indicator light in the instrument cluster still works, so I’m calling it good. I buttoned up some of the loose bits, but left the center console and speaker compartments open so that when the stuff comes in, I’ll be able to start installing a little quicker. Hopefully that’ll be in before this coming weekend.

Here’s a before pic. The new fog lamp switch is already installed in this one. 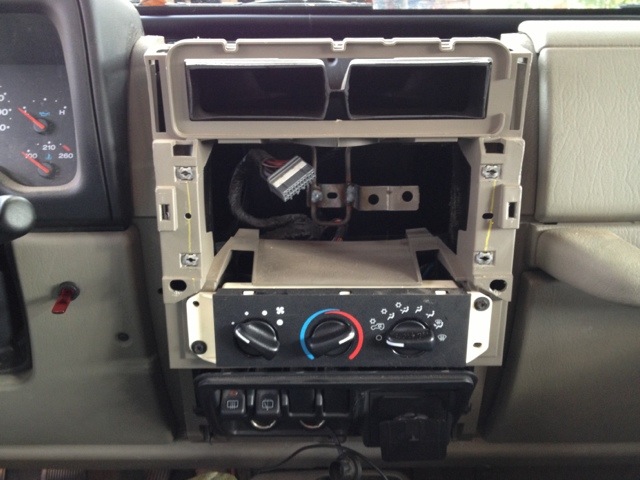 I met a friend at Dick’s Last Resort for a little dinner before the Flogging Molly concert. The food was great, the service was as surly as ever, and the people watching was great. After that we headed over to the House of Blues for the show. It was a sold out show, so we were expecting it to be crowded and weren’t disappointed. There were two opening acts, both of which were excellent. The first was Dave Hause, a one man singer/guitar act. His lyrics were good, and his interaction with the audience was fun. The second was Skinny Lister, a new group out of England that does a punkified version of English folk music. They were great, and I picked up [amazon_link id=”B00AGKH43A” target=”_blank” container=”” container_class=”” ]their CD[/amazon_link] for the drive back.

Flogging Molly was filming this show, so hopefully there will be a DVD with shots of us at some point soon. Their show was fantastic, better from the floor, just outside the pit, than it was from the balcony. They did some of their favorites, staples of their live shows, as well as some newer and older songs they haven’t done in a while. The crowd was energetic, but not obnoxious, and everything was self-policed so that everyone could enjoy themselves as they pleased. They closed the show with one of my favorites, [amazon_link id=”B000ZM2MI6″ target=”_blank” container=”” container_class=”” ]If I Ever Leave This World Alive[/amazon_link]. It’s a bittersweet song, but one that I can identify with on many levels.

On the way home, I popped the CD in to the Jeep’s radio and started listening. I got about 5 seconds in to the first track and it skipped, then locked up. And when I say locked up I mean the radio’s display said “Err” and it wouldn’t eject. I’ve been having problems with the radio for a while, with it randomly powering itself off and the display being all messed up. I guess I shouldn’t have put the CD in, but hope springs eternal. I’m going to pull the radio out of the dash tomorrow and see how mangled the CD is. Not the best end to a great evening…