We got up early this morning and got ready for our trip out to Enchanted Rock. Breakfast arrived on time and was delicious! I didn’t feel in the least bit guilty about the extra calories because we were planning on taking the ranger lead tour. The drive out to the park was nice, we got some really good views of the hill country. We were actually a couple minutes late, but the ranger at the gate radioed over to the ranger leading the tour and had them wait for us.

The hike was a lot of fun. We made it to the top, and then went down the side and hiked around the back before returning to the parking lot and heading back into town. The view from the summit was pretty amazing, and to see the ghost shrimp in the small pools on the rock was cool. On the way around the back, our guide pointed out different features and discussed the local plants. I tried one of the wild persimmons, which was delicious and quite unlike the ones in the stores. By about half way around the rock, the heat had started to build, and by the time we got back to the car, we were ready for the air conditioning. We headed back in to town and grabbed a quick lunch and rehydrated before heading over to Pedernales Brewing Company for another tour. They’re a much smaller operation than Real Ale, but they make some tasty brews and have a nice little operation.

From there, we went over to Opa’s to pick up some brats and other meats. We’ve tried to stop there on other trips, but they close early and we were never there early enough. We made it this time and were rewarded with some yummy sausages, smoked cheeses, and seasonings. It’s a good thing we brought a cooler! Loaded up with carnivore yummies, we went back to the room to get ready for dinner.

Since this is our anniversary trip, we decided to splurge for a nice dinner and chose the Navajo Grill. It was definitely a dressed up place, not just your average restaurant. What was nice was that the food and service exceeded our expectations. Delicious appetizers, perfectly cooked steaks, and wonderful desserts made for a great end to a really nice day. 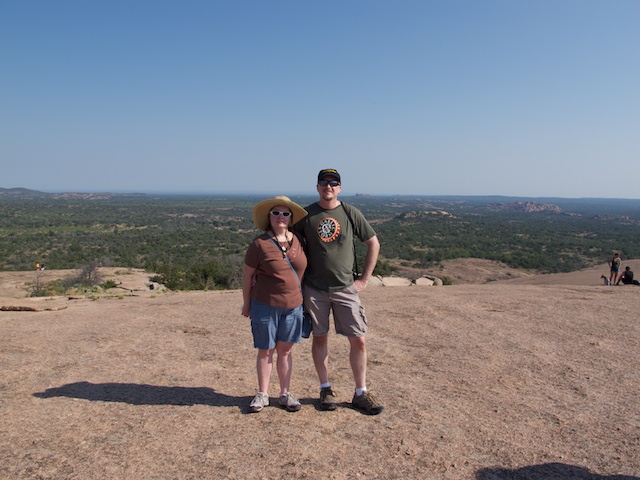 Heather and me at the top of Enchanted Rock

This coming Monday is our first wedding anniversary, so we decided to take a few days off of work and head out of town to celebrate. We decided on Fredericksburg for our destination and booked one of the guest houses that the Cottages at Limestone on Main had to offer. We left in the morning and drove down to Hico to have lunch and pie at the Koffee Kup. From there, we went down to the Real Ale Brewing Company in Blanco and took the brewery tour and did some beer tasting. It was a really fun tour, and I got to talk to the brewmaster about using souring bugs in my homebrew. Maybe some time soon I’ll do something sour.

After that we headed over to the cottage and got checked in and unpacked. The cottage is a decently sized open bedroom/living room/kitchen floor plan with a full bath. The proprietors are really nice, even rescheduling our breakfast for tomorrow due to us needing to be on the road a little early for a hike.

For dinner we went over to the Fredericksburg Brewing Company for dinner and some more beer. I also got a growler filled with their porter, it might get drunk this weekend, but if not it’ll come home and get finished off then. That was about it for today. Tomorrow, we’re heading for Enchanted Rock and then a nice dinner…