Reese and I got started on the Sportster’s restoration by removing the fenders, gas tank, and some other small bits. He was a huge help, finding the perfect tool for the task at hand, lending a hand when needed, and freeing my arm when the rear fender dropped down and pinned it on the tire.

We’ve got all of the sheet metal off now, and I will be working on getting it repaired this spring. Next up is getting the oil tank and engine out so that the frame and oil tank can be stripped and powder coated. It’s got a long way to go before it’s ready to ride, but we’ve taken the first step on the journey… 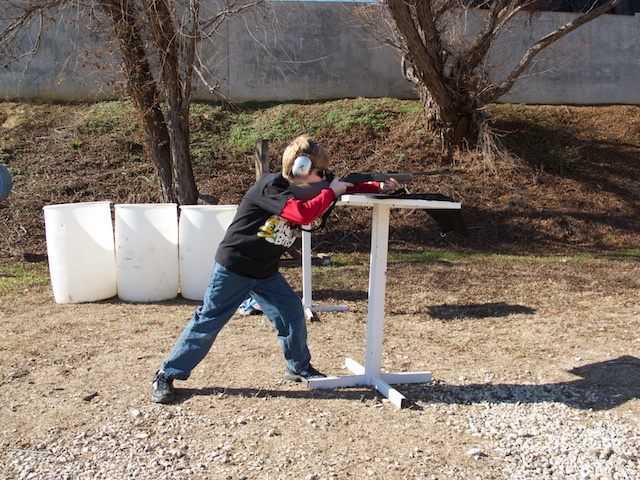 Chris goes into some detail about the issues he’s having with NICS background checks. It’s a good read, so please take the time to visit and see just how badly screwed up the system is. So screwed up that it’s denying someone their rights, even though everyone is agreeing that he’s not a prohibited person.

While out finishing off some Christmas shopping, I happened to find myself at the gun counter over at Dick’s Sporting Goods, looking at one of the Rossi Matched Pairs. It’s a neat setup, with interchangeable single-shot barrels in .22lr and .410 shotgun. It’s youth sized, so I thought it would be great for me to work with Reese on basic marksmanship and safety. I was pretty impressed with its fit and finish, and since the price was extremely compelling (and there was a rebate to boot), the last one in the store came home with me. We’ll see how the little guy does with it when he comes down to visit…

If this article over at Outdoor Wire is to be believed, the ATF is poised to remove the CLEO sign-off requirement for Form 1 and Form 4 paperwork. That means that individuals will be able to complete NFA purchases in counties where the sheriff is hostile. In Texas that includes Bexar (San Antonio), Harris (Houston), and Dallas (Dallas) counties. In other words, a sheriff will not be able to deny someone their constitutional rights simply because they don’t like them.

I would still advise against going down the individual transfer route. It leaves ones family unprotected, as opposed to a well written trust. That has been the legally permissible route to get around CLEOs that refuse to sign off on NFA paperwork. One big reason why it should still be the route of choice is that it allows you to put your family on the trust as well as you. That means that they can legally be in possession of the NFA items as well. For example, lets assume you and your significant other go to the range with a suppressor and you are injured and have to be taken to the hospital. If you’ve done an individual transfer, that suppressor can’t be in anyone else’s possession. It’s an illegal transfer, which is a felony punishable by a $10,000 fine and up to 10 years in prison. So your significant other could not take it home to lock it back up in your safe (you DO have a safe, right?). On the other hand, if it were transferred via a trust, and the significant other is on the trust, it’s good and nobody’s facing jail time.

Keep an eye on this, because it sounds like they’re going to open a comment period, and you can expect the opposition to come out of the woodwork. They love CLEO sign-off on everything, even though it is used to deny people their rights for political reasons.