A remarkably quick read, I guess I was just in to it.  [amazon_link id=”0441016197″ target=”_blank” container=”” container_class=”” ]Valiant[/amazon_link] is the fourth book in Jack Campbell’s Lost Fleet series.  It picks up immediately where the third book finished, and rolled on from there.  He’s doing a little more exposition on the theorized aliens manipulating both sides to fight as well as the journey home.  I like how this book flowed and will be starting the next one as soon as I can.

[amazon_link id=”0765315033″ target=”_blank” container=”” container_class=”” ]By Heresies Distressed[/amazon_link] is David Weber’s third book in the Safehold series.  It picks up pretty much immediately where [amazon_link id=”0765315017″ target=”_blank” container=”” container_class=”” ]By Schism Rent Asunder[/amazon_link] finished, with the invasion of Corisande and the challenge of integrating Charis and Chisholm into the new empire.  There are a few revelations, some more flushing out of the back story and plot, as well as a curve ball about the timeline of the series.  I’m not sure where this is going now, because of a small exchange between Merlin and Cayleb where the answer seems to imply a generational approach.  It’s going to be interesting to see where it goes because the next two books are still featuring the same cast of characters.  If the implication is that at some point in the series we’re going to jump forward in time, I’ll be interested to see exactly when (in the sense of which book) and how far forward.  I’m definitely enjoying this series, and if you’re a Weber fan, you should check them out.

Heather and I went up to the Bavarian Grill for dinner and then popped over to my FFL’s place to pick up the Ruger MkII I had dropped off to be threaded for a suppressor. Andrew did a fantastic job not only threading the barrel but also machining a thread protector that looks like it isn’t even a separate part. The suppressor fits perfectly, but until the tax stamp comes in, I can’t write about its performance. Hopefully that will be in soon, there’s just no telling… 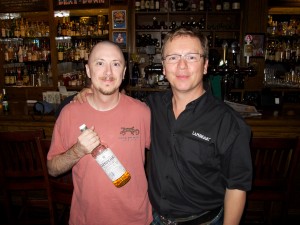 Wanting to beat the heat I got an early start this morning and got to the first photo point on today’s list, Queen Wilhelmina State Park.  From there I got to ride the Talimena Scenic Drive again, always an enjoyable road, on my way to Talihina, AR where I got a picture of the post office.  Next was over to Antlers, AR to take a picture of Ables Western Bar-B-Cue.  I would have liked to stop and eat, but I was running early and they weren’t open yet.  So I headed in to Texas (finally!) and got a picture of the Eiffel Tower in Paris, TX.  After a quick lunch I stopped and snapped a quick pic of Haden House in Ladonia, TX.  It’s a nice example of Victorian architecture nestled in a small Texas town.  After that was done I headed for Greenville, TX for my last photo stop, the Landon Winery.  I tried a little of their chocolate port and had to pick up a bottle to bring home.  It’s really, really good.  The rest of the ride in was uneventful but hot.  I pulled in to the garage some time around 3:00 PM and started unpacking and rehydrating.

This ride was just short of 2100 miles through 5 states.  Here’s a link to the Spot Adventures page for it if you’re interested in the route I took.

On this leg of the ride home I started picking up some more ICR points.  Starting with one of the springs in Eureka Springs.  After that I motored down the road to Terra Studios to take pictures of (and buy some) Blue Birds of Happiness.  After that I had my first real bit of trouble.  I let my pride get the better of me and spent a little over an hour on a succession of one lane dirt, rock, and gravel roads, mostly in first gear, in a failed attempt to find the next point.  After being chased by some goats and riding through someone’s pasture (no kidding, the road actually continued over some cattle guards and through a pasture), I found a road that would take me back to pavement quickly.  That was miserable, and I won’t be doing that again on a touring bike.  After striking out there, I got to The Cliff House Inn and took the needed picture and then set out for the next point.  That one also had to be aborted because it was down another one of those dirt roads, and while I may not be the brightest bulb, even I can learn from my mistakes given sufficient pounding.  Skipping that one, I rode over to Mt. Nebo State Park and enjoyed some really nice twisty roads to get to the photo point.  After that it was over to get a picture of the lodge in Mt. Magazine State Park, enjoying some more twisties.  The last two points were both in Paris, AR: Hannigan Fairings and the Grapevine Restaurant.  After that I made my way over to Mena, AR for the night and got settled in for the ride home tomorrow.

My streak is unbroken.  While packing the bike up this morning it started raining.  14 years of road trips and I’ll get rained on at some point on every single one of them.  I’m not talking about a little drizzle, I’m talking serious downpours.  Reese was really helpful, and between the two of us we got the bike loaded and got me heading down the road.  It was sad to leave, I hate that part of visiting with him, but it is what it is.

Due to the construction backups on I-55, I decided to head out west into Missouri and then head south.  That worked really well, only adding a little time on to the trip, but with much better scenery.  Lunch was in Hannibal, MO where it drizzled a little more and I had to make a roadside repair of my Powerlet plug for the tank bag electrics.  The screw holding one of the wires down had come loose.  My Fathers Day present from Reese, a Swiss Army Knife, came in handy getting everything snugged back down.

After that I continued south, making for Eureka Springs, AR.  There were no other problems encountered during this leg, other than the heat building as I moved south.  I pulled in to Eureka Springs a little after 7 PM, got a hotel room, and unloaded the bike.  On the way in I passed a promising barbecue joint, so I hoofed it back over for some dinner.  It was fantastic.  If you’re in the neighborhood, check out Bubba’s Barbecue.  The ribs are delicious, as is the chocolate cake.

I finally got Reese on the back of the bike this evening.  We got him suited up in his armor, boots, and helmet, and did a quick putt up and down the street.  He was pretty apprehensive at first, but by the end of the first pass he was loving it.  I’m looking forward to taking him on some longer rides once he gets a little older.  I’d love to take him through South Dakota some time.  But we had a good start to it and hopefully there will be many more opportunities.

Reese’s house has a basement, and part of it has been set aside to make into a man cave for him.  So today Reese, one of his friends, and I got to work painting the walls the colors he picked out.  They did really well, not getting tired and bored five minutes in to the project, and actually helped quite a bit.  The paint’s now drying, but it looks pretty good.  I like the colors he picked out.

While we were out running around today, I picked up some fireworks for us to set off once it got dark.  What better way to celebrate our country’s birthday than by blowing up a small part of it?  This was Reese’s first time setting them off himself, and he got the hang of it pretty quickly.  They were all fountain types, no areal stuff or explosions yet, those will come later.  Joi and I both got a little singed on the sparklers, so we’re going to get a longer lighter to keep fingers further away.  But the little guy had a blast (pun intended) so all’s right in the world.